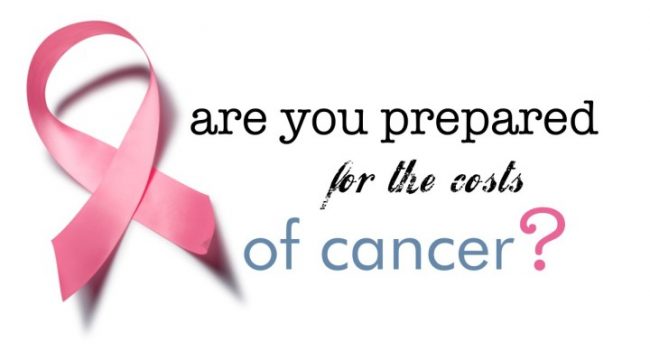 Every year countries throughout the world dedicate the month of October to raising awareness around Breast Cancer. Cancer has increased exponentially and is, in many cases, treatable – at a cost; making cancer a life, health and personal finance issue.
There are very few families in South Africa that have not had one or more members diagnosed with some form of cancer.
Recently I read an email from Money Marketing that highlighted some of the statistics and implications of this disease on individuals and families in South Africa.
According to South African cancer stats for the insured population, 100 000 cases are diagnosed in South Africa each year with 60 000 deaths from cancer each year.
1 in 4 males and 1 in 6 females are diagnosed with cancer in their lifetime (figures for the general population are 1 in 6 males and 1 in 8 females) and the top cancers are breast, cervix, prostate, lung, colorectal and oesophageal.
There is a 40% overall survival rate.
These stats were presented by BrightRock at the launch of the Insuring against the #CostofCancer campaign at the end of August, 2013.
Breast cancer is the most common cancer in women – accounting for over 50% of diagnoses, with an estimated 1 in 29 women being diagnosed in their lifetime.
Liberty critical illness claims figures show that cancer accounts for nearly 50% of all female claims and 32% of claims for males.
“Forty years ago the overall median survival of all cancer types was just one year, now it is predicted to be nearly six years. Add to this that cancers such as colon cancer and non-Hodgkin’s lymphoma have improved 17-fold and 10-fold respectively, more and more patients are living productive cancer free lives than ever before in history,” says Dr Devan Moodely, oncologist and director of Campaigning for Cancer.
Survival rates differ for the types of cancer and stages at which it is diagnosed – any Stage One cancer (excluding non-melanoma skin cancer and prostate cancer) has a five year survival rate of 80% (80 out of 100 people diagnosed were alive after five years), any stage IV cancer has a 10% five year survival rate. (Medical Disability Advisor 6th ed).
Altrisk’s underwriting director Dalene Allen says that while it’s worrying that women are now more likely to develop breast cancer than they were a decade ago – early detection and diagnosis means that survival rates have gone up dramatically, almost 2 out of every 3 women with breast cancer now survive the disease beyond 20 years, compared to less than half in the 1990s.
Breast cancer has put the focus very firmly on early detection, and screening for cancer is becoming more common. While it may have resulted in more diagnoses of cancer in the early stages Altrisk say they have noticed a decline in claims for more advanced stage III and IV cancers.
“The emphasis on pre-emptive screening and early diagnosis and treatment cannot be emphasised enough in the fight against breast cancer. Early detection and treatment of breast cancer are important factors in winning the battle and surviving with less extensive, invasive surgery – and with your finances intact,” says Allen.
Although survival rates are higher when cancer is diagnosed in the early stages – the cost can still be high and the treatment debilitating.
Old Mutual says that a cancer diagnosis can be overwhelming news for any family. What usually follows is a process involving intense treatment, medical bills, time off work and psychological adjustment.
“Even with an early stage cancer diagnosis, treatment and recovery can be a long and even debilitating process. During this time you might not be able to work, and perhaps even suffer side effects of treatment. Besides having to cope with the emotional and psychological trauma of cancer, the side effects of treatment can have a dramatic impact on your normal day-to-day activities and your ability to work and earn an income,” says Allen.

THE COSTS OF CANCER

Cancer costs amount to more than just the medical expenses that deal with treating the disease – and they can mount up very quickly.
Cancer is a PMB – prescribed minimum benefit – but not all medical aids will cover all cancer treatment costs in full. (Contact me if you’re unsure of what this means!)
Most medical aids are great when it comes to covering for cancer treatments, but some of the specialists in Oncology may charge up to 300 percent of the medical aid tariff, leaving those on the lower, entry-level plans having to pay out of their own pockets. In addition to this, newer expensive treatments and drugs may also not be covered by medical aid and it is the cost of these drugs that makes the news – but they are just one cost to be aware of.
There are other costs to consider as well – things like home adjustments, recuperation time and income replacement.
Direct medical expenses include operations, procedures and medication; palliative care includes pharmacist costs, nurses and psychologists. Recovery assistance is a cost that may not often be covered or thought of. The final cost of lost income occurs where illness prevents earning income.
In many of these cases medical aid won’t be sufficient – and other options include insurance – critical illness and/or gap cover; or you can choose to self-fund – but the affordability of this option must be carefully considered.
And don’t assume cover won’t be needed early on. As BrightRock says – “It’s important to be prepared. Don’t wait until it’s too late.”
“The reality is that you need to have cover in place when you are younger,” says Allen. “This is the most productive time of your life, when you are most reliant on your income to meet financial obligations, take care of your family and secure a comfortable future.”
If you would like to review your medical cover, go to my contact page and let’s get in touch soon!

Scroll to top
We use cookies on our website to give you the most relevant experience by remembering your preferences and repeat visits. By clicking “Accept All”, you consent to the use of ALL the cookies. However, you may visit "Cookie Settings" to provide a controlled consent.
Cookie SettingsAccept All
Manage consent

This website uses cookies to improve your experience while you navigate through the website. Out of these, the cookies that are categorized as necessary are stored on your browser as they are essential for the working of basic functionalities of the website. We also use third-party cookies that help us analyze and understand how you use this website. These cookies will be stored in your browser only with your consent. You also have the option to opt-out of these cookies. But opting out of some of these cookies may affect your browsing experience.
Necessary Always Enabled
Necessary cookies are absolutely essential for the website to function properly. These cookies ensure basic functionalities and security features of the website, anonymously.
Functional
Functional cookies help to perform certain functionalities like sharing the content of the website on social media platforms, collect feedbacks, and other third-party features.
Performance
Performance cookies are used to understand and analyze the key performance indexes of the website which helps in delivering a better user experience for the visitors.
Analytics
Analytical cookies are used to understand how visitors interact with the website. These cookies help provide information on metrics the number of visitors, bounce rate, traffic source, etc.
Advertisement
Advertisement cookies are used to provide visitors with relevant ads and marketing campaigns. These cookies track visitors across websites and collect information to provide customized ads.
Others
Other uncategorized cookies are those that are being analyzed and have not been classified into a category as yet.
SAVE & ACCEPT

For all information regarding COVID-19,
please visit the South African government’s Coronavirus news and information portal.